Red Routes in London carry 30% of the city’s traffice but there are restrctions to which vehicles are allowed to use them with Private Hire cars being one of them as long as they’re displaying correct signage. Any unauthorised vehicles will be hit with a penalty charge notice as if they weren’t controlled then they would just get clogged up too. You can identify the red routes by the red no-stopping lines and signs along the road. These red lines give the route it’s names but officially it’s known as the Transport for London Road Network (TLRN).

If you can use red routes then you’ll find you’ll spend less time in traffic and have more time to take on new jobs and ultimately earn more money which is always nice.

As private hire vehicles are sometimes difficult to distinguish from other vehicles on the road and as such will need to display a ‘private hire’ sign similar to the one at the top of this page. This will be quite familiar to most of you and will allow police, CCTV etc to easily identity that you’re allowed to be on the red routes.

When your vehicle goes for its vehicle inspection you will be offered these route exemption stickers, or if hiring you should already have one in there from the previous inspection.

These stickers will need to be placed on the front windscreen below the PCO licence with one on the bottom right-hand side. These are tamper-proof etc to ensure that they can only be used on office private hire vehicles.

Private Hire vehicles are also allowed to pick up and drop off passengers on most red routes as long as you display your private hire vehicle (PHV) license. There are some exceptions though and you can’t stop on the parts of the red route with a wide red line, pedestrian crossings or zigzags.

Where are red routes?

If you’re planning a journey then TFL provide several red route pdf maps that you can download which cover Northn, Central, Southern, and the whole of London. 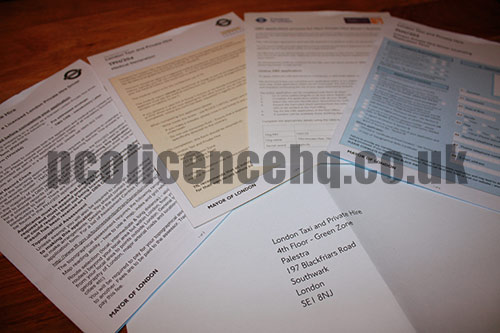